I have been playing arcade games since I was tall enough to reach the joystick, even if that meant with the help of a step-ladder. I was born in 1977 and remember standing on a step-stool not too long afterward, moving a little yellow guy around a maze. The yellow cabinet seemed like a huge cavern compared to my little size as I tried to gobble each pellet from the board. This was around 1980-81 and I was about three years old. The game was Pac-Man. 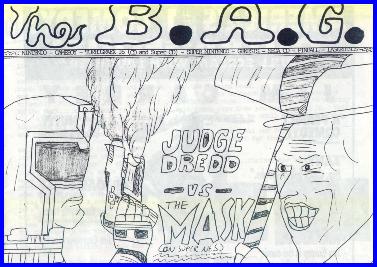 From that moment on (until about 1996) the arcade would be my second home. In fact, video games would be my hobby for over 15 years. I visited the arcade a million times each month. I collected the latest home consoles (from 8-bit NES, to Genesis, to Playstation). I named my bedroom "Bucci's Arcade" with high score boards taped to the wall. Eventually, I even started a Bucci's Arcade Gazette (B.A.G.) newsletter which ended up with over 20 regular subscribers and lasted for two years.

During my early arcade ventures, I noticed a different type of machine amongst the many video games. It was bigger than other vids, shaped very interesting, and had a ball that rolled down a playfield. You used two paddles (or more) to keep the ball into play and get the highest score you possibly could. My first exposure to pinball fascinated me.

However, I was so addicted to video games in the early 80s (especially with some of the Nintendo installments like Mario Bros. and Donkey Kong) that I gave pinball little attention. Most of the pin-games I had the opportunity to play were early solid-state machines from the late 70s. I would drop a quarter in, lose very fast, and head off to play another video game. The titles of most pins I played in the early 80s escape me although I definitely remember dropping a few quarters into Black Knight, Jungle Lord and Comet. This lack of enthusiasm was about to change.

Putt Putt Golf 'n Games was my second home during my childhood years. The arcade was rather small. However, it was close to home and they always seemed to have the latest arcade games. Keep in mind that at this point in history the Atari 2600 reigned supreme as a home console. While always fun to have at home, the Atari never could rival the graphics and playability of an arcade machine. Therefore, I could think of nowhere else I would rather be than at an arcade.

In the corner of this particular arcade there always stood a pinball machine. Like my experience with pinball up to this point at other locations, I would usually plop at least one of my precious tokens into the slot. After a quick game, it was off to jump some barrels on Donkey Kong or try and snag the gold medal on Track 'n Field.

In 1986 my pinball playing was about to take a positive turn. During one of their game rotations, Putt Putt received a new pinball machine. It did not look like any I had ever seen before. It had a red siren light on the top. It had a jet black cabinet with a ton of flashing playfield lights. It had four orange displays illuminating both numbers and letters. It had a cool music track with awesome speech. It was a Williams High Speed.

At first I thought it was just another pinball machine. Although intrigued by its design, I was ready to play a quick game and move on as usual. However, as I watched other people play while patiently waiting my turn, I realized this game was extremely different in many ways. There was a "goal". The "goal" revolved around a story. The story was accompanied by specific music/speech. The music/speech was related to an eventual huge jackpot payoff. Pinball had changed forever and my game playing would never be the same!


This new concept of pinball produced by Williams with games like High Speed (which included stackable jackpots, themes, and stories) was fantastic. Even though I was terrible at pinball, I began to realize what to shoot for and complete. I became determined to play HS over and over until I finally got the jackpot. I don't think I ever did get a jackpot.....but it was a lot of fun trying.

The High Speed story is VERY important in my pinball history because it got me to really "play" the game. Don't get me wrong, I love pinball in all of its many incarnations. I like electro-mechanical and pre-1986 solid-state games. I play them all of the time at arcades, historical museums, and at other collector's houses. I have great respect for everything that came before I was a player.

However, it is not really my area of interest. That is not the kind of pinball I grew up with. It is kind of like Star Trek. I have a lot of respect for the original series (I absolutely love the movies). However, I "grew-up" with The Next Generation and this is the group I am the most fond of. That is what I consider Star Trek, just as games produced after the mid-80s are what I consider pinball.

Subsequent Williams releases like Pinbot, Millionaire, F14 Tomcat and Cyclone appeared at Putt Putt over the years. Like High Speed, I played them a lot as well. I learned many of my skills from this early era of pins. Then....the addiction began! Taxi showed up in late 1988 and became the game which cemented my addiction to pinball. After Taxi there was no turning back and I was now a definite pinball nut.

The first game I bought was in 1993 and I was 16. At this point I lived in an apartment building with my mom (where I had been since I was 2). However, that did not stop me from cramming the machine in my bedroom. That game? A Williams Taxi. The game that got me started as a pinball nut was the game that got me started collecting. Check out the miscellaneous photos section in "Other Goodies" to see a picture of this game in my old room.

The second game I bought was three years later in 1996. We had just moved into a new home with a basement room that I furnished into my personal game/movie room. I knew I could fit at least one other pinball machine into it. Little did I know that this extra room for only "one" other game would later turn into an obsession.

As for the rest of the story, I would say it is history. If you read everything that I write about for every game I own or previously owned (once I get all of the pages completed), most of my pinball history will be uncovered. When it comes right down to it, it is all about the stories! Isn't it?